With the recent birth of a Performance Center based in England, NXT UK superstars are heading into shows in the shape of their lives

JOE spoke to Triple H, former WWE champion and the Founder and Senior Producer of NXT. This Saturday night, the NXT UK: Takeover comes to Cardiff in an event which will be streamed on the WWE Network.

Such a grand, live event places a strong emphasis on the need to compete in peak physical condition. Triple H says that, although it's about looking your best, physical conditioning is mainly informed by one issue: injury prevention.

Strength training for the NXT roster

"We have strength and conditioning coaches overseeing everything. All our programmes are overseen by Sean Hayes in the US, but he now plans gym programming in the UK too."

Hayes is a close ally of Joe DeFranco, personal trainer to Triple H and his wife, Stephanie McMahon. DeFranco's conditioning programme helped the former WWE champion overcome a series of shoulder injury setbacks, to the point where he even became bigger and stronger as a result.


Triple H continued: "As the business evolves, and it becomes more demanding, training for us to get the guys in peak physical condition. 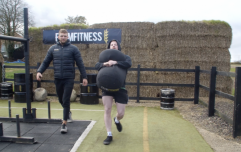 END_OF_DOCUMENT_TOKEN_TO_BE_REPLACED

"Superstars need to be bulletproof, in their best physical shape. The injury rate in professional wrestling is high, and you’ll never be able to avoid it 100% - but this is best method for keeping them safe."

I recently trained with NXT UK superstars at the Performance Center in England, so can vouch for the gruelling workouts HHH speaks of.

As part of our conference call, Triple H also shared his thoughts on wider aspects of the NXT business. He was asked if he has any other UK cities in mind for a NXT Takeover.

"All of them! If there's a city with a passion, a fanbase and a desire to see the best in-ring performances, we'll provide a platform through it on the WWE network."

On the development of NXT UK:

On the influence of British wrestling:


"I had a lot of different influences around me, William Regal being chief among them. So my knowledge and appreciation of the UK scene is huge.

On main event talent such as Drew McIntyre making a potential move to NXT UK:

"Drew McIntyre sees something special. But superstars want to be a part of it because the brand is hot, on fire, not to spend their off-days at NXT UK.

"We all like to see our skills put in front of fans who are passionate and love what we do."

"As you see in the US with NXT making the shift over to the USA Network, the different platform here in the middle of September and moving forward up to two hours every week.


popular
QUIZ: How well do you remember Celtic players of the 2000s?
QUIZ: Name the players to have scored for six or more Premier League clubs
How many times can you see the number 3 on this iPhone screen?
The JOE Friday Pub Quiz: Week 183
QUIZ: The hardest Gavin & Stacey quiz you'll ever take
The JOE Friday Pub Quiz: Week 185
PlayStation and Xbox users will now be able to play against each other online