This, and the fact he's fronted more than 40 magazine covers, make him one of Britain's best bodybuilders. But how does he get in stage-ready shape? Recently, Terry shared his full abs workout routine on social media.

The secret to Ryan Terry's abs workout is similar to how you'd train any other muscle for growth. He hits the abs from a variety of angles, and with high volume.

The same applies whether you're training your chest, legs or biceps.

Terry, a former heating engineer from Worksop, says his current abs workout routine looks like this: 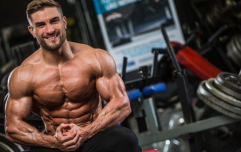 END_OF_DOCUMENT_TOKEN_TO_BE_REPLACED

You might be surprised to see 'tensing' form part of a bodybuilder's actual workout. It's not just for show, though.

By repeatedly flexing a muscle, you are improving your ability to move that muscle under tension, and against resistance. That's pretty much what weight training is in a nutshell.

This is worth bearing in mind if you're trying to put some muscle mass on, at least.

No abs workout will give you a ripped midsection without getting your diet in check first, however.

Ryan Terry previously told JOE that diet is more important for getting shredded than time spent in the gym.

"Food over training, every time," he said.

"You can't just rely on the gym to get the results you want. When you start dieting, you must look at the food you're consuming. It's not a 12-week diet, it's a lifestyle change."

"I follow a high-carb, low-fat, medium-protein diet - consuming two grams of protein for every kilo I weigh. These are amounts I can sustain and that help my metabolism."

Terry also said that when you consume your food is as important as what you're eating.

"For the early part of the day, which is generally when I train, I will have eggs and oats for breakfast and then I'll eat white fish and white meat such as turkey, tilapia and chicken.

"These are lean protein sources that digest very quickly without much fat. My carbs are also high around this time in order to fuel my training."

popular
The JOE Friday Pub Quiz: Week 227
The Only Way Is Essex star Mick Norcross dies, aged 57
Police break up wedding party with 400 guests at school
'Kent variant' of Covid could be 30% more deadly than original strain, PM reveals
A definitive ranking of every swear word from worst to best
Deep fake meme lads sing sea shanty that will make you want to abandon your childhood sweetheart and circumnavigate the globe
Joe Biden has removed a bust of Winston Churchill from the Oval Office
You may also like
Fitness & Health
Build muscle with Ryan Terry's Mr. Olympia workout
Fitness & Health
The UK's top fitness model shares his workout and diet plan
Fitness & Health
You can now buy a bed that converts into a home gym
Fitness & Health
Gym+Coffee opens its first UK store in London
Fitness & Health
Ex-SAS soldier Ollie Ollerton on the diet which keeps him ripped aged 49
Next Page