We have all probably uttered the phrase 'eating is cheating' at some point in our life, but is there any science to it?

As we've grown older, we've (at times) wised up slightly and often 'line' our stomachs before a night of drinking.

There are far too many variables for us to know ourselves whether it actually makes a difference or not, so thankfully the BBC have put the theory to the test.

BBC One series The Truth Behind Alcohol took two people for a night out. One lined his stomach with a modest dinner and the other left her belly empty and open for sheer and utter disaster.

The theory of eating is that alcohol is absorbed into the body not in the stomach, but rather in the small intestine. If your tummy is full of yummy food, it takes longer for the alcohol to reach the intestine.

The two troopers taking part in the experiment breathalysed themselves throughout the evening.


Poor hungry Natalie had an alcohol reading of 44 just 20 minutes after her first glass of wine. This was almost double host Javid's 23. 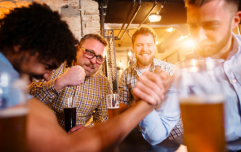 END_OF_DOCUMENT_TOKEN_TO_BE_REPLACED

An hour later Natalie's reading dropped to 32 but Javid's was more than 50% less at just 15.

So yeah, eatin' may be cheatin' but being twice as drunk as your mate is just asking for disaster.

Plus, it's a great excuse to grab a pizza before you head on out later.


popular
Arsenal-bound Willian posts farewell message to Chelsea fans
QUIZ: Name every WWF champion from the Attitude Era
The 11 unbreakable rules of making a cup of tea
Who is the most handsome footballer in the Premier League?
Ben Stokes to miss remainder of Pakistan series
Young guys absolutely lose it hearing Phil Collins' In The Air Tonight for the first time
The JOE Friday Pub Quiz: Week 203