Beware of what you see on social media

Before and after pictures are meant to motivate you - but when you see how easily photos can be manipulated, they can have the opposite effect.

Judging your own body and fitness levels based on what you see on social media can be profoundly damaging. Here is why.

Personal trainer Max Bridger posted the following before and after images on Instagram. It genuinely looks like he's been dieting or on a weight loss cut for a few weeks.

But there's a catch.

We asked Max to explain how he manipulated these pictures in just 90 minutes. 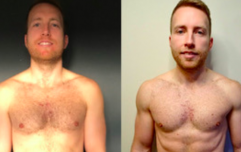 END_OF_DOCUMENT_TOKEN_TO_BE_REPLACED

He said: "The first photo is relaxed, in a neutral and straight on stance, with flat, white lighting. I also have a glum expression, which all add up to making this before shot appear worse.

"The after shot is at a better angle and pose for my body type (wide waist and narrower shoulders), with more yellowed spotlighting that is set above and to one side. I've angled myself towards the light to provide shadow across the muscles, which adds contrast and highlights muscle mass and definition more."

All you see is a mere lighting change - but that's just one example of how before and after images are routinely manipulated on social media.

"There are a few really simple ways to improve transformation photos that are often done accidentally," Max says.

"Different heights for the camera provide a subtle change in perspective (higher tends to be better for male physique shots where the torso and thighs are prime targets).

"Zooming in, or out, more on the after photo depending on whether you’re trying to show muscle gain or fat loss is another. And just using basic editing options like contrast, sharpen and such like available on Instagram on the photo you are more proud of – as you wouldn’t naturally bother playing with a shot you are simply using as your low point (physique wise)."

END_OF_DOCUMENT_TOKEN_TO_BE_REPLACED

What you might not realise is the majority of 'after' images will be taken straight after a workout.

One of the co-founders of LDNMuscle, Max said: "Other techniques most people will use include having an impromptu photoshoot straight after a gym session, with a better tan, in better lighting, tensed rather than relaxed, and then picking the best image out of the several they took."

"I shot with a photographer… I think he made me look 30 per cent bigger. I said, 'What have you done?'"

This man grew up wanting to be a fitness model - but he says there is a lot they don't tell you about bodybuilding photo shoots. @bdccarpenter pic.twitter.com/IPiB5UEpzQ

It is common for influencers and celebrities to go one step further, to the point image editors distort their bodies to make them narrower in some places, wider in others, and more defined across the abs, arms and shoulders (usually).

Whereas you would need a professional photographer to do this years ago, the same manipulation can be achieved quite easily on a smartphone.

Bridger says: "Worryingly, this kind of editing can now be quickly and fairly well-achieved with smartphone apps.

"It has become much easier for people to feel they have to have every single bit of content they put out edited to maintain their 'online image'. It's one of the reasons you have lots of glamour accounts with bendy backgrounds around the waist and hips." 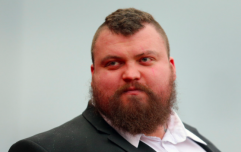 END_OF_DOCUMENT_TOKEN_TO_BE_REPLACED

Such clear and obvious image distortion can have a damaging impact on mental health.

Bridger says: "For some people, transformation-style imagery can be damaging. I personally could be feeling quite good about my physique and physical performance, before stumbling on my explore page and coming across tens of demi-god like individuals living their best life on Instagram.

"If you are constantly exposed to images of people in enhanced versions of their (natural) peak conditioning, it becomes more unlikely that you will ever feel satisfied with your own body image.

"Thankfully, I am in a position to know how easy it is to manipulate photos with technology, and how easy it is to purchase and transform your body with the right steroids and performance enhancing drugs in months (if not weeks)."

Does this mean we should disregard before and after photos as an indicator of fitness progress?

"I wouldn't say you should disregard transformation photos. You just need to examine them more closely (especially if you are considering parting with your hard-earned monies for one of their products the transformation shot is being used to directly or indirectly advertise!)"

In people who may suffer body image anxieties, the long-term effects could lead to conditions such as anxiety, depression, body dysmorphia and eating disorders.

Max says: "We all have our unique levels of mental resilience, so I am not saying influencers are directly responsible for an increase in mental health issues, but I would assume social media (via the mediums of smartphones and reality TV) has a uniquely negative influence on a lot of people's mental health long term in modern times."

popular
Fernando Torres has got absolutely jacked since retiring from football
BrewDog launches petition to rename airport 'Joe Biden International'
Bots buy thousands of PS5s on day of GAME restock
A definitive ranking of every swear word from worst to best
Donald Trump 'furious' at the amount of celebs performing at Joe Biden's inauguration
Pardonpalooza: Donald Trump planning 100 pardons on last day of presidency
QUIZ: Can you identify these cities highlighted on a map?
You may also like
Fitness & Health
The Body Coach Joe Wicks is back to help the nation get fit during lockdown
Fitness & Health
Everything the World's Strongest Man eats in a day to get absolutely jacked
Fitness & Health
Why Joe Rogan's Carnivore Diet didn't really help him lose 12 pounds
Fitness & Health
Fitness influencer opens up on his battle with an eating disorder
Fitness & Health
Americans warned not to eat raw meat sandwiches over the Christmas period
Next Page