This week is Mental Health Awareness Week (MHAW). Some 1 in 4 people in the UK will be affected by a mental health issue each year, with anxiety and depression being the most common problems. The theme of this year's MHAW is relationships, because your relationships - with family, friends, partners, co-workers - are the cornerstone of good mental health. Here, one JOE writer talks about the benefits - on and off the pitch - of his relationship with his rugby teammates.

"Don't worry about heading out there Carl. They may look scary, but they're all a great bunch of lads."

END_OF_DOCUMENT_TOKEN_TO_BE_REPLACED

I first started playing rugby as a dare from a tutor. I was fast pouring my life down the drain, fucking up my academics in a silly effort to rebel.  Massively misinterpreting brutal honesty and rudeness for "cool" and intelligence, I wanted to hurt people because they had hurt me, and I wanted to hurt myself because I thought I deserved it and no one else cared.

So a tutor dared me to play rugby with a local team, because if I wanted to wreck my body and drink loads, she reckoned I may as well do it making some new mates who could knock some sense into me. 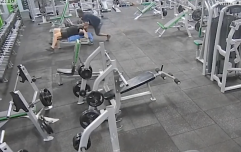 END_OF_DOCUMENT_TOKEN_TO_BE_REPLACED

When I first met my current team in Essex I was still incredibly raw to the game. My tackling was weak. I dropped the ball constantly and butchered chances (I still do). I was always reluctant to stick my head in the fire.

But if my team mates were annoyed at me for being rubbish, they didn’t show it; for the most part the fact I was there as another body to run against twice a week outweighed anything. Turning up and trying every week was the only thing I needed to do to earn a bunch of hardened rugby players' respect.

Turning up and trying every week is the starting point for everything you achieve in life.

END_OF_DOCUMENT_TOKEN_TO_BE_REPLACED

After a few weeks training, I had to skip out on one training session.

"Can’t be there Thursday because of family stuff," I said.

The biggest, most intimidating prop I had ever seen turned to me deadpan and said: "We’re your family now Carl."

That was that. That was all I needed.

"See? You mattered. You were valuable, and that’s a great feeling isn’t it? Think how many people go through life... and the source of some of their discomfort is that they don’t feel valuable."

This week, I've been talking to sports psychologist and coach Steve Black about the positive impact sport can have on people's lives (expect a full interview soon). Regarded as a "second father" to Jonny Wilkinson, Steve is a kind, gentle soul who speaks almost evangelically about how all sport can help people going through struggles.

Like many things men enjoy, rugby is a sport of towering contradictions. Rugby is where 30 or so people try their hardest to beat the snot out of each other for 80 minutes… and then put on shirt and ties to congratulate each other about it over dinner and drinks.

Rugby is where 15 and 16-stone men, bodies honed by gym and protein shakes, celebrate victories by drinking six or seven pints. Rugby is meant to be one of the most masculine, war-like sports around. It’s where men are men - who happen to spend a remarkable amount of time doing homoerotic things and taking showers together.

Rugby is chaos. It’s a sport designed to be a bit of a mess, full of moments of head-rocking pain and knockdowns, but providing you have 14 other people backing you up, you should be able to come through.

"In a way, there are certain things in life that are going to be a great challenge, that need to be in a person’s life to help them deal with things. Now if they’re there by choice, you can try and get that out of their lives, try to replace that with more things they enjoy doing, more people they like to be with, more people that make them feel good. Not sycophants, but people that genuinely make them feel good."

Sometimes in life you’re going to be faced with a 22-stone juggernaut barrelling towards you, and you get flattened. A ball will bounce in a way you could never predict and throw you off your game. One day it’ll look like the world is going to end, rain chucking down, cold getting to your bones, and you’re going to want to give up.

The thing about rugby is there’s always a squad of friends right behind you to pick you up, help you dust yourself off, and get back in the fight with you.

Sport can sometimes help you to feel like a winner, because when you take part you are surrounded by people who are happy to see you there. I think that's the start of something special.

Canterbury teamed up with the nation’s leading rugby experts and players to host the ultimate rugby training experience. Find out more about the day and Canterbury’s new training range at: www.canterbury.com