WATCH: The new Lion King trailer alongside the same scenes from the original movie

This is genuinely brilliant.

Late on Thursday night, the trailer for the live-action remake of The Lion King was released, and people collectively lost their shit.

Despite the massive hype that there was around the trailer alone, it still managed to deliver.

It has somehow made us even more excited for the movie than we already were, and that's what trailers are there for, right?

But as brilliant as it is, it becomes even more impressive when you see the new trailer alongside the same scenes from the original movie which was released in 1994.


Have a look for yourself here, and try tell us you don't have goosebumps after watching it:

Here's a side-by-side of 'The Lion King' trailer with the same scenes from the 1994 original movie. #TheLionKing pic.twitter.com/nHpKHWDzPJ 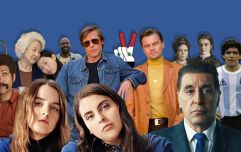 END_OF_DOCUMENT_TOKEN_TO_BE_REPLACED

The video was posted by Lights, Camera, Podcast, and the similarities have just made us even more confident that this live-action remake will be a smash hit.

The only bad news is that the movie won't be available in Irish cinemas until 19 July 2019.