The definitive ranking of the best Christmas movies of all time 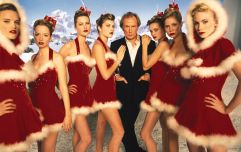 END_OF_DOCUMENT_TOKEN_TO_BE_REPLACED

The first-ever Xmas film is believed to be Santa Claus, made all the way back in 1898. The one-minute trick film features Santa arriving after two young children have gone to sleep. It might not look like much to modern eyes, but it is still better than The Santa Clause with Tim Allen.

Neither of those films make our list, but lots of other classic Christmas movies do. And if your favourite is missing, let us know.

We won't read your message, we'll be too busy drinking mulled wine and watching Die Hard. But definitely still email in.

20: The Knight Before Christmas (and all the other Netflix Christmas movies) 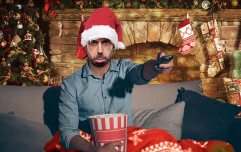 END_OF_DOCUMENT_TOKEN_TO_BE_REPLACED

Ok, so this entry isn’t really just for the film where Vanessa Hudgens falls in love with a time travelling medieval knight at Christmas (though it is genuinely enjoyable nonsense). We just wanted to acknowledge the fledgling genre of the awful-but-brilliant Netflix Xmas romcom, which is fast becoming a tradition for many. Every year they seem to pump out even more of these Christmas movies, and long may it continue. 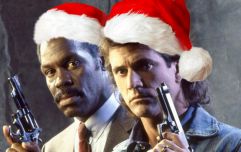 END_OF_DOCUMENT_TOKEN_TO_BE_REPLACED

When asked to submit an entry explaining why I love Jingle All The Way so much, I thought I would struggle to go beyond “It has Arnold Schwarzenegger and The Big Show in it”. But when you add Verne Troyer to the mix alongside alongside Turboman, a toy that any self-respecting eight-year-old would want to get their hands on, you’ve got all the ingredients of a Christmas classic. (Alex Roberts)

A lot of people like this film because they saw it when they were kids. I first saw this film when i was eighteen. It was the summer of 1998, and me and my mates thought it was hilarious. I had to crawl the TV to turn it off cos we were ROFL-ing so hard I was afraid one of us would have a stroke. It’s one of the reasons i got into making mash ups - the line ‘put that cookie down’ struck a chord and I had a song in my head I had to make. (swedemason)

This 2015 comedy didn’t make much of an impact on its release, but it is a bit of a hidden Christmas gem. Seth Rogen, Anthony Mackie and Joseph Gordon Levitt play a trio of friends in their early 30s who always have a massive night out on Christmas Eve. But now Rogen and Mackie are ready to move on with their lives and settle down, while Gordon Levitt isn’t ready to give up the tradition.

Rogen and Gordon Levitt recapture the chemistry they had in moving cancer drama 50/50, and the film manages to balance the gross-out humour with a genuinely touching story of friendship and growing up. Plus it features an incredible supporting cast of comedy stars, including Nathan Fielder, Mindy Kaling, Ilana Glazer, Jillian Bell, Lizzy Caplan, James Franco, and an absolutely scene-stealing turn from Michael Shannon.

You could be excused for presuming that a low-budget horror film where wrestler Bill Goldberg plays a murderous Santa Claus would be rubbish. But put those prejudices aside, you will find a genuinely hilarious, slapstick comic gem. Santa’s Slay is a film that knows exactly what you want from it, and delivers a surprisingly shocking level of violence with exactly the right level of irony. Stick it on after a few beers on Christmas Eve, and you won’t be disappointed.

Christmas Vacation is largely plotless - it is really just a series of skits arranged in chronological order in the run-up to Christmas. But it works, for two reasons.

First, be it by design or accident, it captures the run-up to Christmas surprisingly well, as we hurtle through various obligations and deadlines trying to live up to a perfect, impossible Christmas we have built up in our heads.

And second, those skits are really damn funny. From “Shitter was full!” to the cat being electrocuted, the gag rate is ridiculously high.

One of the better screen versions of A Christmas Carol (not the best, but we’ll get to that), this updates Dickens' classic tale to the 1980s, with Bill Murray as a sleazy TV executive. Some great meta jokes and genuinely scary puppets elevate the material, but honestly, you can’t really go wrong with ‘Bill Murray as Scrooge’.

It is obligatory to put Miracle on 34th Street on any list of Christmas movies, so here it is.

Festive imagery is littered throughout Tim Burton’s filmography, from The Nightmare Before Christmas to Edward Scissorhands.

But there is nothing quite like the snowy Christmastime Gotham City of Batman Returns. Christmas doesn’t really play into the plot of the film, but Returns is one of the weirdest mainstream blockbusters ever released, and the Christmas decorations are an essential part of its bizarre gothic, S&M aesthetic.

Elf is one of those Christmas movies that has been somewhat spoilt by novelty Christmas jumpers with “Santa, I know him!” It has become the cinematic equivalent of the Christmas song you are sick of hearing by the 2nd of December.

But try to put that to one side. When you actually sit down to watch it, Will Ferrell’s completely uncynical performance will instantly win you over all over again.

New York is the most Christmassy city in the world. Fact. And in the same way that the Home Alone sequel captured the Big Apple’s festive spirit, Kubrick’s wonderful use of red and green Christmas lights capture a similar feeling.

Despite being set in Manhattan, Eyes Wide Shut was actually shot on a soundstage in Buckinghamshire. Which gives it this strange, dreamy quality, like a Christmas half-remembered that may never have actually happened.

Produced by the Coen Brothers, directed by Ghost World’s Terry Zwigoff and starring the great Billy Bob Thorton, Bad Santa has became a cult Christmas favourite classic in spite of – or maybe because of – its spiky, unsentimental tone.

It had a troubled production and the studio tried to Disney-fy the film, but its bitter, nasty heart still shines through and it is all the better for it.

Look I know what you’re going to say and I’ve heard it all before.

Yes, obviously Colin Firth is a cucked weirdo who basically purchases a Portuguese wife from France, yes Martine McCutcheon is unfairly called fat the whole time, and yeah sure, Alan Rickman is a total, undeniable shit.

But despite its myriad flaws, Love Actually is actually a perfect Christmas film. It calls back to an era where we weren’t consumed by tribal politics, where a naive young Englishman could roam America as a shagging novelty and everything wasn’t on fire. As a film it’s messy, tangled and occasionally pretty cringe, but isn’t that what Christmas is really all about? (Josh Kaplan)

If I can urge you to watch just one film on this list that you might not have seen before, it would be this one. Tokyo Godfather is a beautifully animated modern fable, about a trio of homeless people in Tokyo who find an abandoned baby on Christmas Eve, and try to return her to their parents. You will be thrilled, you will be in awe, and you will definitely cry.

Anime genius Satoshi Kon passed away aged just 46, having completed only four films, all of them masterpieces. And while he was known for his trippy visuals and reality-bending narratives, Tokyo Godfathers is the most traditional of his filmography and the best entry point for the newbie.

7: The Nightmare Before Christmas

Anyone who’s ever laid eyes upon this visual marvel will immediately recognise it. The use of stop motion animation gives it a physicality that CGI movies lack, it feels real (as real as a Halloween town or Boogeyman can feel) and less sterile than some animated pictures. Combined with stellar voice acting and a genuinely funny script, it is clear this is a film made with heart, affection and true attention to detail. Tim Burton’s reported rejection of the possibility of a sequel, and protectiveness over the intellectual property suggest this to very much be the case.

For a film which turns 27 this year, it has aged remarkably well, and much of that is down to the music, composed by Danny Elfman (the man responsible for The Simpsons theme) who also provides the singing voice of Jack Skellington.

The music is both festive and ominous, perfectly capturing an almost childlike joy and excitement of Christmas, juxtaposed with the inescapable and unashamed horror of Halloween Town and its residents.  The music is also extremely catchy, which helps.

The Nightmare Before Christmas is not a Christmas tearjerker. It will not renew your faith in humanity or make you want to reconnect with those around you.

It is, however, a fun and visually stunning story which never fails to be charming and which, at 76 minutes long, can actually be watched in one sitting, even with a house full of loud relatives. (Wayne Farry)

The key to a good festive film is to have a strong theme. The importance of forgiveness, family, love, friendship - all solid messages for Christmas movies to carry.

Gremlins goes down a slightly different route: giving your son a weird, exotic creature that turns into a murderous monster that can multiply and go on a rampage that more or less destroys the town as a Christmas present is maybe not a good idea. (Rich Cooper)

The debate over whether Die Hard is a Christmas film or not is both boring and not important.

The important thing is that Die Hard is one of the finest action thrillers ever made, and it also features ‘Christmas In Hollis’ by Run-DMC.

You wouldn’t think the mix of family sentimentality and homicidal violence committed by a 10-year-old would make a Christmas classic, but somehow, it does.

Home Alone 2 is almost exactly the same film as Home Alone 1, only it takes place in New York, and is therefore twice as Christmassy. Plus you can laugh at the Donald Trump cameo again this year.

If you ignore the talking frogs and musical vegetables, this is actually a pretty accurate adaptation of 'A Christmas Carol'; the timeless tale of a miserable old bastard (Michael Caine) who gets blackout drunk on Christmas Eve and starts singing with ghosts. Something like that. The musical numbers definitely take centre stage, and there are some certified bangers in there.

It's a heartwarming watch from start to finish - except for The Ghost of Christmas Yet To Come who is the absolute stuff of nightmares. (Daniel Orr)

I always think of the title It's a Wonderful Life as being massively ironic. Whether it's vague memories of sweet old Clarence earning his wings, the hugely saccharine Hollywood ending, or the poster artwork that makes it look like a breezy romcom, IAWL has developed an almost twee reputation. A more apt title would be 'It's a Fucking Awful Life'.

This is a film that includes two suicide attempts, financial ruin, institutional corruption, visions of a dystopian capitalist present/future, and a trail of broken dreams. George Bailey is a good man, with hopes and dreams and seemingly boundless optimism, who is systematically broken down by rotten luck and cruel circumstance. It's a really dark film that doesn't shirk the innate misery of life. And yet, it refuses to be cynical. It reminds you that the human connections you make, the good deeds you do, and the lives you enrich are what makes your existence worthwhile and worthy. It is also an ode to community beyond self.

Any film that the FBI describes as 'Communist' and anti-wealth has my vote. (Nooruddean Choudry)