Definitely Sky Plus this

Hayao Miyazaki is one of the world’s greatest filmmakers.

The Japanese animator and founder of Studio Ghibli founder is the man responsible for such classics My Neighbour Totoro, Howl’s Moving Castle, Princess Mononoke and Ponyo.

But perhaps his most-loved movie is Spirited Away, which airs on Film4 at 12.55am tonight. 10-year-old Chihiro loses her parents when they stop off at an abandoned amusement resirt – only for her to discover on her return that they have been transformed into giant pigs. In order to save them, she has to navigate her way through a world of mysterious supernatural beings, and find her way back to the earthly realm.

It a film filled with incredible, unforgettable imagery. Miyazaki devises up hundreds of wonderful spirits and creatures, from giant dragons to heads that roll about like footballs. And they are impeccable animated with the trademark Studio Ghibli love and care. 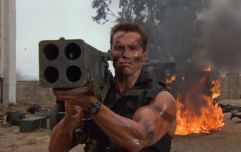 Film4 is screening a big season of Arnold Schwarzenegger films

END_OF_DOCUMENT_TOKEN_TO_BE_REPLACED

Despite having been a star in Japan for over 15 years prior, Spirited Away was really Miyazaki and Studio Ghibli’s breakthrough in the West, and the film won the Best Animated Feature Oscar in 2002.

The film is showing as part of Film 4’s Ghibli season, which also includes classics like Grave of the Fireflies and Porco Rosso.