Why is this so unnerving?

A second trailer for Men In Black: International was uploaded this week. But somehow, Sony managed to upload the video file without any of the musical score. 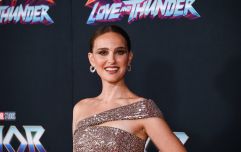 END_OF_DOCUMENT_TOKEN_TO_BE_REPLACED

Trailers these days are always filled with booming Inception-style music or Pitbull songs, so to see one with any of that is genuinely a bit unnerving. All the dialogue from the cast is there, but many of the scenes play out in an eerie silence.

Just check it out:

Here is the proper version, that was quickly reuploaded in its place.

END_OF_DOCUMENT_TOKEN_TO_BE_REPLACED

Men In Black: International is sort of both a remake and a sequel at the same time - it's set in the same world, but there's no Will Smith or Tommy Lee Jones to be seen (Some familiar aliens do pop up in the trailer though).

Instead, Liam Neeson and Chris Hemsworth star as Agents H and M (in no way affiliated with the high street retailer), with Emma Thompson playing their boss.

Tessa Thompson takes the Will Smith role, as the new recruit introduced to the fold.

Other big names in the cast include in Rebecca Ferguson, Kumail Nanjiani, and Rafe Spall.

It is directed by F Gary Gray, the man behind Friday, Straight Outta Compton and The Fate of the Furious.

The Men in Black have always protected the Earth from the scum of the universe. In this new adventure, they tackle their biggest, most global threat to date: a mole in the Men in Black organization.

While this new movie might seem an unexpected direction for the franchise to go in, it could have been a lot stranger: at one point a Men In Black meets 21 Jump Street crossover was being worked on.