The movie was made entirely during quarantine

Like everything, COVID-19 has thrown film production into disarray - how are you meant to make a movie when actors aren't allowed to be within two metres of each other? 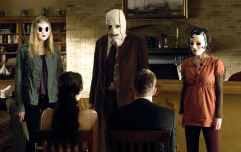 END_OF_DOCUMENT_TOKEN_TO_BE_REPLACED

While the rest of the film and TV industry was trying to figure that out, British director Rob Savage was busy making Host, a brilliantly terrifying horror movie set entirely on Zoom.

Host, which is now available on Shudder and through Amazon Prime, takes place during the pandemic, but it isn't directly about coronavirus or anything. Under lockdown, six young friends agree to take part in a séance online. While most of them don't take it very seriously, things suddenly get very, very real, very quickly.

The séance-gone-wrong plot is hardly original. And neither is the concept of a film consisting entirely of video calls and computer screens, with both Unfriended and Searching getting a good reception in recent years. But what is remarkable about Host is that is was written, directed and edited in 12 weeks, entirely during lockdown.

The film started out as a prank video that Savage made to scare his friends while on a Zoom hangout, using the software to transition to a clip from the Spanish horror movie REC. That clip went viral, and Savage realised there was potential in an entire film.

He then wrote a rough outline and assembled as cast. There was only one problem though - he had to direct his actors over video call, in their own homes, with them having to set up their own lighting and shots. They even had to do their own make-up, stunts, and special effects, with direction from the VFX team over Zoom. The film never looks cheap or amateur though - instead, it has a realness that only enhances the jump scares.

A few TV shows have tried Coronovirus specials, where the cast all get together on Zoom. But they've all been rather hokey, recycling the same hack cliches about Zoom not working and stockpiling toilet paper, jokes that everyone was already tired of.

12 weeks ago we had an idea to make a movie during lockdown. Now #HOST is on the front page of @Shudder. Making a film with my friends has been such a gift during this mad time.

So turn off your lights, crank the volume and crack a beer. See you on the other side. #HappySpookies pic.twitter.com/neybTAB5Uf

END_OF_DOCUMENT_TOKEN_TO_BE_REPLACED

Host has none of that. It is a horror movie first, that just happens to be one that is set during the lockdown. COVID just brings colour to it that makes everything more real (and therefore even scarier).

It is full of relatable little details. One girl is holed up with her parents, and another is clearly having issues with her boyfriend being trapped together 24/7. A third friend has escaped to a big house in the country. The chemistry between the cast feels real and natural, like friends who have actually hung out on Zoom a lot, and don't find the concept gimmicky any more.

With UK lockdown restrictions having now been eased somewhat, the film almost feels nostalgic for April and May 2020. At least in Britain, where the film is set, some of us can now congregate with our friends. We all know there are going to be plenty of terrible movies and TV shows written about COVID, but you feel none of them will capture the very unique feeling of lockdown better than Host does.

END_OF_DOCUMENT_TOKEN_TO_BE_REPLACED

And best of all, it's just a really scary horror film. Rob Savage knows how to make you jump and scream at every bump on the soundtrack or figure in the background. He also knows how to exploit every peculiarity from the experience of video calls, from the frame rate dropping to filters, to a brilliantly inventive use of custom backgrounds. Watch the film in the dark, with the sound up loud.

Host is available now on the horror streaming service Shudder, and can also be found on Amazon Prime through Shudder's channel on there. Shudder also has a free seven day trial, and it worth signing up just to watch Host.

popular
Conor McGregor deletes disgusting tweet about Khabib's dead father
New video of Wayne Rooney on night of ‘stitch up’ pics emerges
Man who claims he’s Charles and Camilla’s child is now using his son as ‘proof’
A definitive ranking of every swear word from worst to best
Filipino Olympic weightlifter will be given $660,000 and 2 houses for winning country's first gold
Here's how to see who's been taking screenshots of your Instagram Stories
Police find 48TB of 'mostly adult' material in Shilpa Shetty's home after husband's arrest
You may also like
News
University students could need to be double jabbed to stay in halls
News
Piers Morgan says he got Covid at Wembley despite already being double jabbed
News
Covid could be spread through flatulence, say ministers
News
Italy set to impose 'green pass' restrictions on unvaccinated
News
Covid-positive man boards flight disguised as wife
Next Page