Sarah Connor is back

The history of the Terminator franchise is long and complicated. Part one is a brilliant, stripped back thriller, that feels more like a slasher movie than a big blockbuster. And part two is the greatest action movies all time.

Part three is actually quite good and better than people give it credit for, but it is a rehash of part two, and thus seems not as good when compared to that classic. God knows what was going on in four, and five is a complete mess that sets itself up for sequels that will never happen.

Oh, and there’s The Sarah Connor Connor Chronicles that ran for two seasons, but I never watched that.

But now, we’re finally getting Terminator 6 – or just Terminator as it has been rumoured to be called. We’ve previously seen some on-set photos, but now the first official image is out. 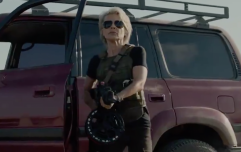 Arnold is back yet again in the first trailer for Terminator: Dark Fate

END_OF_DOCUMENT_TOKEN_TO_BE_REPLACED

The still shows Linda Hamilton back as Sarah Conor, and she looks as badass as she did all the way back in Terminator 2.

We also see new cast members Natalia Reyes and Mackenzie Davis. Arnold Schwarzenegger is in the film, but he's not in any official images so far.

The officially-as-yet-untitled sequel is directed by Deadpool’s Time Miller, and is out next November.


popular
Is Ole Gunnar Solskjaer the worst manager in the league?
Samoa Joe on WWE, MMA and what Brock Lesnar is really like
THE JOE FRIDAY PUB QUIZ: WEEK 175
A foolproof guide to actually beating Liverpool this season
Tickets for UFC London are about to go on sale
QUIZ: Can you guess the pixelated movie posters?
Roy Keane is angry at everything bar his own tedious punditry