It is only a matter of time, really

When Disney acquired 21st Century Fox earlier this year, movie fans had two thoughts. First, that soon all entertainment will be controlled by one all-powerful megacorporation, eating all competitors alive, with no reason to risk innovation or originality. And two, Thor and Deadpool can now be in the same film together!

END_OF_DOCUMENT_TOKEN_TO_BE_REPLACED

Yes, Fox have long-owned the film rights to the X-Men movies, meaning that Disney couldn't feature them in the Marvel Cinematic Universe. That has all changed now, and theoretically, they could just drop Wolverine et al into the next Avengers movie or whatever. However, having spent so much time building up the Marvel Cinematic Universe, there's hope they might be a little more tactful about it.

There is one character who could most feasibly get away with universe-hopping shenanigans or whatever, and that's Deadpool, because his whole schtick is breaking the fourth wall and stuff.

Now a rumour is circulating from MCU Cosmic saying that Disney is exploring how they can get Ryan Reynold's motor-mouthed-money-machine into their main line of movies. According to MCU Cosmic, there are three ideas in play at the moment:

There are a few interesting ideas there. Deadpool 3 is basically inevitable, but setting it in the MCU, maybe starting it with Wade Wilson jumping realities or something, could help stop things from getting stale.

The Disney+ series proposition raises some questions, since the streaming service will reportedly not include any R-rated content. Which would kind of rob Deadpool of most of his appeal. 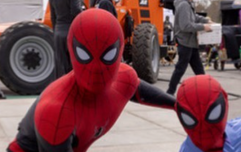 END_OF_DOCUMENT_TOKEN_TO_BE_REPLACED

Guest-starring in a Spider-Man film though? That sounds good. Thor: Ragnarok was basically a Thor & Hulk team-up movie, and that was arguably the most fun Marvel film yet. Plus, Spidey and Deadpool make a lot of sense together - both spend far too much time making bad jokes, and they've appeared alongside each other many times in the comics and even have an ongoing team-up title at the moment.