Good news Brooklyn Nine-Nine fans, we're getting even more episodes than we thought

The feel good story of 2018 just gets better. 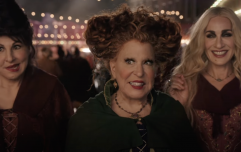 END_OF_DOCUMENT_TOKEN_TO_BE_REPLACED

In what was quite the dramatic saga; the beloved comedy Brooklyn Nine-Nine was cancelled by Fox only to get miraculously saved following a huge fan outcry.

NBC did the decent thing and stepped in, confirming that there will indeed be a sixth season of the hit show.

A 13-episode order was initially announced, but now comes the news that we're getting even more that that.

The Hollywood Reporter notes that season six will now consist of 18 episodes in total, though this number still represents the lowest episode count in Nine-Nine history.

Seasons one, four and five all boasted 22 episodes, while seasons two and three had 23.

Still, we'll take what we can get at this stage.

Brooklyn Nine-Nine returns to TV screens later this year, with an official release date yet to be confirmed.

popular
Police hunt for two 'laughing' men who kissed three-year-old girl in front of distressed mum
Father takes his own life after 18-month-old found dead in hot car
British teen says she was raped in Majorca hotel by 'famous actor and musician'
NASA shares images of unidentified spacecraft crashed on Moon
Angela Rayner humiliates Dominic Raab over opera reference
R Kelly sentenced to 30 years in prison for sex trafficking and racketeering
Halifax has introduced staff pronoun badges and its customers are not happy
You may also like
Entertainment
A Brooklyn Nine-Nine one-off special is nearly here
News
Terry Crews admits he has a porn addiction
Entertainment
Brooklyn Nine-Nine has officially started filming season eight
Entertainment
QUIZ: Match the Brooklyn Nine-Nine quote to the character
Entertainment
Why Brooklyn Nine-Nine is ending after eight seasons
Next Page