The full trailer for Borat 2 is here, and it does not disappoint at all.

Highlights include Borat trying to kill COVID with a frying pan and magnifying glass, asking if Harry Potter is a sex criminal and wearing a face mask as a mankini.

It looks like Sacha Baron Cohen will be going undercover as some other characters as well - not least Donald Trump, as we see him crashing a speech by Vice President Mike Pence while dressed as the President.

We also get introduced to Borat's daughter, and it is all set to a unique cover of Eminem's 'Without Me'.

Amazon has picked up the film for worldwide distribution for the film, and it will be available on Amazon Prime Video on October 23rd.

Masks ARE very nice! #Borat is back October 23rd. pic.twitter.com/3WHCREKSTX 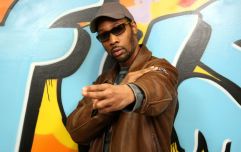 END_OF_DOCUMENT_TOKEN_TO_BE_REPLACED

The full title of the sequel will be Borat Subsequent Moviefilm: Delivery Of Prodigious Bribe To American Regime For Make Benefit Once Glorious Nation Of Kazakhstan.

The film was made in secret earlier this year, with details only slowly starting to emerge.

According to Collider, the film finds Borat "thinking he’s a big movie star after the success of the original 2006 film made him famous, so he’s trying to hide from the public by pretending to be someone else, and starts meeting and interviewing people incognito."

You may also like
Film
Lord of the Rings TV show rumoured to include sex and nudity, and fans aren't happy
Quiz
QUIZ: Match the Marvel Cinematic Universe quote to the character who said it
Film
The Batman has been delayed to 2022
Tech
Facebook responds to The Social Dilemma criticism
Film
Cineworld confirms it is temporarily closing all its UK and US cinemas
Next Page