If you feel like doing absolutely nothing this week, all three films in the Back To The Future trilogy are back on Netflix UK. 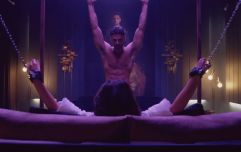 END_OF_DOCUMENT_TOKEN_TO_BE_REPLACED

This would be the part in the article where we would normally tell you a bit about the films in question. But this is Back To The Future. You know what Back To The Future is. You've seen it a million times. It's a classic.

And Part II is great as well. Maybe not quite as perfect as the first one, but it still has the Sports Almanac, and the hoverboards, and then all that stuff where they recreate the end of the original.

And then there is Part III, which isn't very good, but if you've already spent the afternoon rewatching the first two for the trillionth time, what else are you going to do - not watch the third one? Don't be stupid. Plus, it has a train in it.

There you have it - the entire Back To The Future sage. Apart from the animated series, but don't worry about that.

And before you bring it up, part for definitely isn't happening, that was just a hoax.