Arachnado, a film about spider tornadoes, is here to save 2020

Sharknado, but with spiders instead of sharks - what's not to love?

Earlier this month, we suggested that Ju Jitsu, a film where Nicolas Cage leads a bunch of martial artists against aliens, was going to be the best film of 2020. Then we discovered Arachnado.

We apologise for this error.

The first trailer for Arachnado has been released, and it appears to be exactly what it sounds like. A cyclone headed for Los Angeles picks up a load of giant spiders and throws them all over the city.

It is basically just Sharknado but with spiders instead of sharks.

It does not appear to be officially connected to the Sharknado franchise. Those films are made by a studio called The Asylum, which outside of their shark movies are best known for making 'mockbusters' - cheap knock-offs of real blockbusters, like Transmorphers, Triassic World and Atlantic Rim. Arachnado might however be the first time someone has made a 'mockbuster' of an Asylum film, as opposed to the other way around.

Arachnado comes from a director named Dustin Ferguson, who's other titles include Los Angeles Shark Attack, Angry Asian Murder Hornets, and Ebola Rex. He has 97 credits as a director on IMDB! 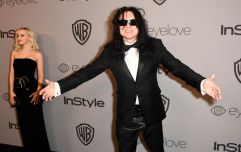 END_OF_DOCUMENT_TOKEN_TO_BE_REPLACED

Arachnado is due to be released on DVD and VOD at Thanksgiving in the US - there is no word yet on a UK release.

The Sharknado films ended up having six installments, which took the sharks around the world and even back in time, and featured cameos from everyone from David Hasselhoff to Jedward to WWE wrestlers to Olivia Newton-John to the presenters of Good Morning Britain.

Will Arachnado find the same success? We can only hope.


popular
The JOE Friday Pub Quiz: Week 219
Funeral parlour workers pose with Diego Maradona's body in coffin
A definitive ranking of every swear word from worst to best
Tyson Fury: Going bald is beautiful and should be embraced
Can you get more than 12/15 in this childrens' TV quiz?
Donald Trump mocked for delivering speech at tiny little table
Lidl have released a Pigs In Blankets Pizza for Christmas

You may also like
Film
Sharknado was made under a fake title and the cast tried to quit when they found out what it was really called
Entertainment
The next Sharknado film contains a T-Rex fighting a shark
Film
The next Sharknado film has a T-Rex fighting a shark and yeah... we're expecting Oscars
Politics
Borat 'defends' Rudy Giuliani's 'sexytime' encounter following major controversy
Gaming
First image from Uncharted movie shows Tom Holland as Nathan Drake
Next Page