A Keanu Reeves film festival is coming to the UK

When did Keanu Reeves become one of our most beloved movie stars? 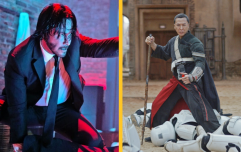 END_OF_DOCUMENT_TOKEN_TO_BE_REPLACED

Throughout most of the 1990s, he was still (wrongly) thought of by many as an airhead pretty boy - but slowly but surely, over time, through Speed and then The Matrix and ultimately the mighty John Wick - and not forgetting plenty on memes - he now one of the coolest guys in Hollywood.

This weekend, UK fans will get to worship at the altar of Keanu, with an all-weekend Keanu Reeves film festival. KEANUCON will take place on Saturday 27th and Sunday 28th April 2019 at the Centre for Contemporary Art, Glasgow.

The festival will span Reeves' whole career. Obviously, The Matrix, Speed, both Bill & Ted movies, and John Wick are all showing. But there are also some lesser seen films, like Gus Van Sant's My Own Private Idaho from 1991, and Reeve's directorial debut Man of Tai Chi.  There is also a preview of his new film Destination Wedding ahead of its DVD release in May.

The full programme is:

More information and tickets can be booked here.