This needs to happen.

Gavin and Stacey fans have been calling out for a reboot of their beloved show. The series, which starred James Corden, Larry Lamb and Matthew Horne, was hugely popular when it first aired between 2007 and 2010. 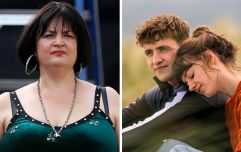 END_OF_DOCUMENT_TOKEN_TO_BE_REPLACED

It's also seen an influx of newcomers in recent years after being added to Netflix.

While we can all live in hope that it will some day return, Larry Lamb has given some good and bad news.

The bad news is that it won't be coming back as a TV series, BUT he did say that a movie is a possibility.

According to OK! Magazine, he said:

"I don’t think anybody that was in it would ever say no to it.

I think it’s highly unlikely that they’ll ever make another television series of Gavin & Stacey.

I think it’s a distinct possibility that one day, they might make a film, that’s it."

popular
Two brothers vanish with $3.6 billion of bitcoin in what could be the biggest crypto heist in history
Transgender runner CeCe Telfer ruled ineligible for Olympics
Neighbour cuts tree in half in classic display of British pettiness
Both of Karim Benzema's goals vs Portugal were scored on the 46th minute, 44 seconds
Britney Spears tells court father won't let her remove birth control
UK Government urges children to sing bizarre 'One Britain One Nation' song on June 25
The JOE Friday Pub Quiz: Week 248
You may also like
Quiz
QUIZ: The hardest Gavin & Stacey quiz you'll ever take
Entertainment
QUIZ: How well do you remember the Gavin and Stacey Christmas special?
Life
9 deserving contenders for the face of the new £50 note
Entertainment
Gavin & Stacey fans really shouldn't be getting anything wrong in this quiz
Quiz
Personality Test: Which Gavin & Stacey character are you?
Next Page