Today is the anniversary of Leeroy Jenkins, the greatest video in nerd history

It's been 12 years since one of the defining pieces of internet culture came to light.

Back in May 2005, a video was uploaded to World of Warcraft fansite Warcraft Movies. The video featured a guild of WoW players about to enter a dangerous area, discussing strategies, calculating percentages and generally taking the whole thing quite seriously.

Then out of nowhere comes Leeroy Jenkins. Who is Leeroy Jenkins? Leeroy Jenkins is a maverick, a loose cannon, a force of nature. While his compatriots are crunching numbers and plotting their next move, Leeroy shouts out his own name and charges into the fore.

His fellow players, momentarily stunned, decide to run in after him, and everything goes to pot. And so, an internet legend was born. 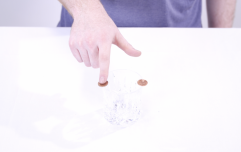 END_OF_DOCUMENT_TOKEN_TO_BE_REPLACED

Now it's worth mentioning that this isn't the original video; that has been lost to the corridors of WoW cyberspace. Nor is it even the first YouTube version - that one is sitting on over 46 million views, but we like HD, so we're giving you HD... or something close to it.

It doesn't matter what definition you're watching Leeroy Jenkins in, though. What matters is that you have your sound on and that you wait for it. It's so worth it.


popular
The FootballJOE Quiz: Week 2
The definitive ranking all 151 original Pokémon from worst to best
This is how much time most men need after orgasm before they're ready for another round
A definitive ranking of every swear word from worst to best
What to eat at McDonald's after a hardcore workout
US fitness experts claim tequila is the healthiest alcohol you can buy
These 10 flags are objectively the best in the world

You may also like
Entertainment
Netflix confirm You is returning for a third season
Entertainment
THE JOE FRIDAY PUB QUIZ: WEEK 173
Entertainment
UFC fighter reviews fight scenes from Hollywood films
Entertainment
How to open a beer bottle when you don't have a bottle opener
Entertainment
Hugh Grant and Matthew McConaughey guess British slang
Next Page