There was a jaw-dropping reaction to Three Identical Strangers

If you missed it, the film is available on Catch Up

Three Identical Strangers, a documentary from 2018 that seems to have a mind-blowing effect on all who see it.

Having premiered at last year's Sundance Film Festival, the movie quickly impressed critics as it generated a huge buzz.

The Tim Wardle-directed doc falls into the tradition of truly great non-fiction films in that while the original subject matter is interesting to begin with, the twists and turns that arrive along the way make it genuinely essential viewing.

Think the likes of Metallica: Some Kind of Monster, Capturing the Friedmans and The Imposter - incredible stories elevated by unexpected revelations and individual moments that result in you demanding friends and family check it out immediately.

Three Identical Strangers, difficult as the story may be, belongs in such conversations.

As the synopsis reads:


"Three strangers are reunited by astonishing coincidence after being born identical triplets, separated at birth, and adopted by three different families. 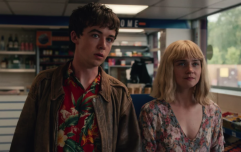 END_OF_DOCUMENT_TOKEN_TO_BE_REPLACED

"Their jaw-dropping, feel-good story instantly becomes a global sensation complete with fame and celebrity, however, the fairy-tale reunion sets in motion a series of events that unearth an unimaginable secret – a secret with radical repercussions for us all."

If you weren't watching on Thursday night, the good news is that Channel 4 have added the film to their online player. Just click here to check it out.

If you were watching, you probably reacted with enough shock and awe to qualify for the next season of Gogglebox.

Those who tuned in were left bemused, enraged and shaken by the experience.

To say much more would be to spoil the narrative for anyone who has yet to check out Three Identical Strangers, but this should give you some idea...

Watched #ThreeIdenticalStrangers last night, couldn't sleep thinking about it. Going to take a few days to digest everything.

Is this man actually sitting here laughing and joking about this?! “Haha I know someone who looks like you” “I know your twin” what an absolute freak oh my god😨🤯😤 #ThreeIdenticalStrangers

So when are we storming Yale's library to reclaim the study???? People have lost their lives over this #ThreeIdenticalStrangers

It was hard not to be angry whilst watching #ThreeIdenticalStrangers, last night. Such a startling lack of medical ethics from people who were professionals, and such a lack of insight into the moral deficiencies of such behaviour.

Just watched #ThreeIdenticalStrangers. To say I am mind blown and disgusted is an understatement. So sad for all the families involved.

#ThreeIdenticalStrangers 😮 one of the best documentaries I’ve seen for a while, very interesting take on research ethics and the nature vs. nurture debate.

You may also like
Entertainment
COMEDY BOX: Why you need to watch... The Tez O'Clock Show
Entertainment
The lost Brass Eye episode you'll (probably) never see
Entertainment
REVIEW: Stephen Graham gives a career-best performance in Shane Meadows’ new TV show The Virtues
Entertainment
Applications to appear on the next season of Gogglebox are now OPEN
Entertainment
I watched an episode of Married At First Sight and learned that every day we stray further from God's light
Next Page