To put it lightly, the following image is the stuff of nightmares.

I'm sure having a wax statue of yourself installed in Madam Tussaud's is a great honour, one bestowed only on the most talented and famous in show business. A sure sign that you've truly 'made it.' 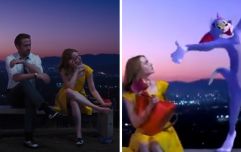 END_OF_DOCUMENT_TOKEN_TO_BE_REPLACED

We've seen many good, bad and ugly wax figures erected in the iconic wax museum including those of Justin Bieber, Taylor Swift and Michael Jackson.

The newest wax statue getting serious attention is one of La La Land star Ryan Gosling, paying homage to the multitalented 36-year-old actor.

Reportedly shown to the public for the first time in Berlin, the eyes, goatee and overall stance just seem a bit creepy and not at all like the charismatic chap we've come to know Ryan as.

Of course it's important to remember that it is just a wax statue, but when you see it you'll fail to understand how on earth they got this so wrong...

I mean, it looks like Ryan Gosling, but when you look at Ryan Gosling you don't feel like he's actually a killer robot, or some kind of soul-stealing ghoul.

He's still a handsome dude, though, so we don't think this wax figure will be tempering anyone's man crush on ol' Gozzer.

On the other hand, we'll never sleep again. Swings and roundabouts.

popular
North Korea is running out of food as a bunch of bananas 'now costs $45'
GB News fans cancel Specsavers because they hate cancel culture
Paul Gascoigne reckons he was a better player than Foden even when he was drunk
A definitive ranking of every swear word from worst to best
John McGinn asks for a bottle of Coke at Euros press conference
Russian manager goes against Ronaldo and drinks bottle of Coke at press conference
GB News reads out prank messages from 'Mike Hunt' and 'Mike Oxlong'
You may also like
Entertainment
18 thoughts I had watching The Notebook for the first time
Entertainment
Ryan Gosling talking about his dog who died will break your heart
Entertainment
WATCH: German awards ceremony descends into farce as Ryan Gosling lookalike picks up award for Ryan Gosling
Entertainment
Odds of Ryan Gosling becoming the next James Bond cut following Oscars gaffe
Entertainment
A new drama starring Fassbender, Gosling and a host of big-name musicians sounds like a must-watch
Next Page