Morgan was put in his place by co-host Susanna Reid

END_OF_DOCUMENT_TOKEN_TO_BE_REPLACED

Meghan and Harry made a number of startling admissions in the two-hour prime-time interview that aired Sunday night on CBS.

The pair alleged that members of the royal family had "concerns and conversations about how dark his [their son Archie's] skin might be".

Oprah was left visibly stunned, and while Meghan said concerns were relayed to Harry, they declined to name the family member because of how "damaging" the claim is.

Meghan said there have been several conversations with "family" on the topic.

The pair were asked by Oprah if these were "about how dark your baby is going to be?"

Meghan responded: "Potentially, and what that would mean or look like."

"They were concerned that if he were too brown, that that would be a problem?" Oprah asked.

"I wasn't able to follow up with why," said Meghan, "but if that's the assumption you're making, I think that feels like a pretty safe one."

"I just didn't want to be alive anymore."

Meghan Markle has revealed during a bombshell interview with Oprah Winfrey that she had suicidal thoughts at the height of her time in the monarchy.

She said that at some points after her marriage she "just didn't want to be alive anymore". 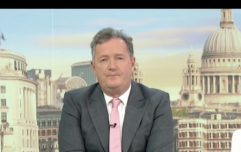 Piers Morgan will not get Good Morning Britain job back

END_OF_DOCUMENT_TOKEN_TO_BE_REPLACED

Meghan added that when she expressed her feelings to "the institution," she was told that she could not seek help for her mental health issues.

"That was a very clear and real and frightening constant thought," she said. "And I remember how [Harry] just cradled me.

This wasn't enough for Piers Morgan, who said he didn't believe the Duchess of Sussex.

‘Anyone who says they were left feeling suicidal, you have to feel sympathy for them.’ @susannareid100 responds to @piersmorgan’s question of whether she feels ‘genuine sympathy for Meghan’ after watching that interview.

Watch the full interview on @ITV at 9pm. pic.twitter.com/lht1Xh572p

Morgan asked co-host Susanna Reid: "Do you feel genuine sympathy with Meghan Markle and Prince Harry after watching that load of bilge?"

Reid replied with "Anyone who says they were left feeling suicidal, you have to feel sympathy for them."

popular
Scotland international rugby star Siobhan Cattigan dies aged 26
Woman wins millions after suing mum's GP for allowing her to be born
A definitive ranking of every swear word from worst to best
Elon Musk shares 'evidence' we are actually living in a simulation
Nasa warns 'concerning' asteroid will break into Earth's orbit in a week
Lovely Bones author apologises to exonerated man who spent 16 years in prison for her rape
There's a petition to stop interviewing Will and Jada Smith so we can all be 'free'
You may also like
Sport
Piers Morgan savages Lionel Messi on Twitter after he wins 7th Ballon d’Or
Sport
Piers Morgan calls out "managerial halfwit" Michael Carrick after Ronaldo decision
Sport
Piers Morgan defends Michael Vaughan over Yorkshire racism allegations
Life
Piers Morgan on the Queen's health: 'It's clearly a more serious situation'
News
Piers Morgan joins FOX News Media in global broadcast deal
Next Page