It's more Hollywood involvement for the Fleabag star

The makers of Indiana Jones, Lucasfilms, have announced that Phoebe Waller-Bridge has been cast as the female lead in the fifth-installment of the franchise. 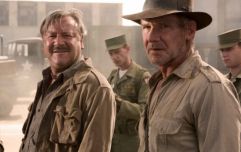 END_OF_DOCUMENT_TOKEN_TO_BE_REPLACED

The Fleabag creator, who was also recently involved as a writer on the new James Bond film No Time To Die, will appear in the new film alongside Harrison Ford, who will be returning as the famous archeologist.

For the first time though, it will not be Steven Spielberg directing an Indiana Jones film. James Mangold will be the director, with Spielberg, who created the franchise, serving as a producer.

In a statement on their website, Lucasfilm announced the casting of Waller-Bridge, alongside the news that John Williams will yet again be composing the music for the film.

The statement reads: "If adventure has a name…it must be Indiana Jones! Phoebe Waller-Bridge (Fleabag, Solo: A Star Wars Story) will star alongside Harrison Ford, who is returning to the role of the legendary hero archaeologist, for the fifth installment of the iconic franchise.

"In addition, the inimitable John Williams will return to score the film, continuing a musical journey which began 40 years ago with Raiders of the Lost Ark. Williams’ unforgettable Indy soundtracks, packed with all the epic thrills, suspense, romance and excitement that fans have come to expect from an Indiana Jones movie, have become as beloved and familiar as the adventurer-hero’s signature hat and whip."

Mangold described Waller-Bridge as a "dazzling actor and brilliant creative voice," and praised the chemistry that the actress would bring to the set.

The film is set to be released on July 29 next year, 14 years after Indiana Jones and the Kingdom of the Crystal Skull hit the big screen. Whilst it received mixed reviews from critics, it was a huge box office success, raking in $790 million worldwide making it the second-highest grossing film of 2008.

As of yet there is no information on the plot for the film or the role that Waller-Bridge may have.

A new #IndianaJones adventure begins July 29, 2022. Phoebe Waller-Bridge joins the cast alongside Harrison Ford in the fifth installment of the iconic franchise. The inimitable John Williams will also return to score the film. pic.twitter.com/Qh8nvFiQsE

popular
New Zealand weightlifter set to make history as first trans athlete at the Olympics
UK-born actor Ace Ruele faces deportation to Jamaica
Alan Carr's new show hit with Ofcom complaints because there were no white players
Spanish press target Eden Hazard for his reaction to Champions League defeat
Dad reported to police for walking with young daughter 'clears his name'
There's no proof trans girls perform better in sport than cisgender girls, says doctor
Family of murdered PCSO ask ‘where’s the huge outrage’ one week on from her death
You may also like
Entertainment
Here's why Indiana Jones and the Temple of Doom is Spielberg's most underrated film
Entertainment
Steven Spielberg on a female-led Indiana Jones franchise: "There would be nothing wrong with that”
Entertainment
Indiana Jones 5 is officially happening and it's even got a release date
Entertainment
Twitter users do their best to name the new Indiana Jones film
Entertainment
Harrison Ford and Steven Spielberg confirmed for new Indiana Jones film
Next Page