Don't f*** with the Peaky Blinders!

The premiere date for the sixth and final series of Peaky Blinders has finally been announced after being delayed like most things due to the pandemic.

The Shelbys are returning once more for their Birmingham-based drama, which has become a fan favourite thanks to brilliant performances from the likes of Cillian Murphy, Anabelle Wallis and the late Helen McCory.

The Shelbys are back in business. Watch the final series of #PeakyBlinders on @BBCOne and @BBCiPlayer from 27 February. pic.twitter.com/Sq9kC9YINd

Director Anthony Byrne shared a teaser clip in November, captioning the post: "We're coming for you sooner than you think", and there has been mad speculation since. 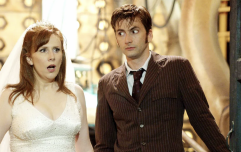 END_OF_DOCUMENT_TOKEN_TO_BE_REPLACED

But the BBC has now revealed that the sixth series will air on Sunday 27 February, with each episode following weekly at 9 pm.

The final series has added Stephen Graham to the cast, who recently saw great success in Boiling Point and Help alongside Jodie Comer. Tom Hardy will also return as Alfie Solomons.

But there is one star who will be missed greatly by the cast and fans alike. Helen McCrory, who played Polly Gray, died from cancer last year. Due to the pandemic, she was unable to film any scenes for the final series before her death.

Murphy recently admitted it was "really hard" to film without her.

END_OF_DOCUMENT_TOKEN_TO_BE_REPLACED

He told The Guardian: "She would have been in series six if the pandemic hadn't put everything on hold.

"We were just five days away from shooting in March 2020 when the lockdown was announced. Helen was the heart of that show and it was hard to make it without her. Really hard.

"There was this huge absence on the set. We all felt it. She died while we were shooting.

"She was too young. You can't help but think of all the amazing roles she would have had."