He is a man of many talents

The list of footballers who have gone into acting is longer than you might think, Vinnie Jones being the most obvious example. Ian Wright and Stan Collymore have also featured in films, not necessarily good ones, but films nonetheless.

Eric Cantona starred in the highly rated 2009 film 'Looking for Eric', too, and his compatriot Olivier Giroud is about to join the list of footballers-turned-actors.

Giroud has landed himself the role of voicing the Green Goblin in the French version of the upcoming Spider-Man movie, alongside his France teammate Presnel Kimpembe who will perform the voice of Scorpion.

The France duo announced the news on social media today ahead of the film's release on December 12. 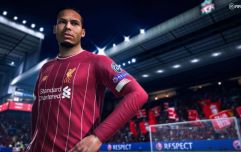 END_OF_DOCUMENT_TOKEN_TO_BE_REPLACED

Giroud is currently injured and could struggle to regain his place in the Chelsea line-up after Álvaro Morata's recent return to goalscoring form.

Still, a Morata hasn't been in a Marvel film, has he? Or won a World Cup for that matter. So who's the real winner?


popular
QUIZ: How well do you know The Lost Boys?
Jenson Button on crashes, his Brawn fairytale and the rules of the road
This is the hardest Pokémon quiz you'll ever take
The JOE Friday Pub Quiz: Week 179
Five Fantasy Premier League Tips for Gameweek 28
9 excuses when you haven't done your homework in secondary school
KNEECAP answer the most annoying questions Irish people get asked

You may also like
Sport
Football according to Big Sam Allardyce
Sport
Was Barca's Martin Braithwaite signing fair?
Sport
The FootballJOE Quiz: Week 1
Sport
Behind the scenes at FC Porto vs Benfica
Sport
Ruud Gullit on why Virgil van Dijk will never win the Ballon d'Or
Next Page