You might have noticed by now that we're very excited for the release of FIFA 17.

Ever since we got our grubby little paws on it for a test run a few weeks back, we've been dying to get stuck into it for more than just a quick run through. 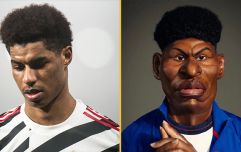 END_OF_DOCUMENT_TOKEN_TO_BE_REPLACED

One of the things we're most excited for in the new game - besides all the gameplay improvements - is the new 'The Journey' feature which allows you to try take a young player named Alex Hunter to the top of world football.

In the short amount of time we had to play it, we were struck by its depth and we're excited to dive deeper into it once the game comes out for real. And judging by Manchester United striker Marcus Rashford's recent comments on it, The Journey is about as close as most of us will ever get to pursuing a career in the Premier League.

"There are ups and down for all footballers and that's shown in Alex's journey. I just have to try to stay level throughout and not get too high when things are going well or too low when things aren't quite as good.

The England international cites his own remarkable rise through the ranks at Manchester United as a real-life reflection of Alex Hunter's story.

"I was training and playing with the under 18s and under 21s. When I was called up to train with the first team I had to make sure I kept my performance consistent and then when you get your chance you've got to make sure you take it because you might not get another one. It's important you show the manager what you can do."

"It definitely reminds me of my experience, when you see Alex go into the manager's office you don’t know what he's going to say or what it's going to be like, so it brings back memories."

From our experience, it looks pretty damn realistic.

Visit https://www.easports.com/uk/fifa/news/2016/fifa-17-marcus-rashford-journey to read the full interview, and learn more about The Journey and Alex Hunter here.

popular
Incredible case of the only known individual whose parents were two different species
Cyclists may have to get number plates under radical shake-up of road laws
Alec Baldwin: 'Everybody who was there knows exactly who’s to blame' for Halyna Hutchins' death
Darius Danesh opened up about his health struggles before his tragic death aged 41
TikTokers are utterly convinced there is a secret zombie apocalypse going on in China right now
Darius Danesh pictured with Gerard Butler before his death
Pop Idol star Darius Danesh found dead aged 41
You may also like
Sport
Man United 'relaxed' about PSG's pursuit of Marcus Rashford
Sport
Marcus Rashford tells kids to 'dream big' as he guest edits the Beano
Sport
Australian TV star loses it over 'embarrassing' photo of Marcus Rashford
Sport
Manchester United turn down Tottenham’s approach for Marcus Rashford
Sport
Roy Keane takes aim at Marcus Rashford for 'smiling' before game even starts
Next Page