Laura Woods has been forced to silence Twitter users who questioned what happened when she briefly dropped out of view when presenting the talkSPORT breakfast show last week.

END_OF_DOCUMENT_TOKEN_TO_BE_REPLACED

Woods was joined alongside Jamie O'Hara and Trevor Sinclair as part of the line-up and during the show, Woods dropped out of view in order to disguise a yawn.

However Twitter did what Twitter does best and made a whole scene out of something that really wasn't that much of a big deal.

Many tried to joke and accuse the presenter of taking drugs while on air, with several tweets claiming that Woods had "sniffed a line."

Quick to put these frankly ludicrous rumours to an end, Woods was forced to respond and explain that it was nothing more than a simple yawn.

She said: "Bloody hell…I’m yawning you absolute donuts. It’s a live-streamed breakfast show. Give your heads a wobble."

Bloody hell…I’m yawning you absolute donuts. It’s a live-streamed breakfast show. Give your heads a wobble

The presenter has been working on the talkSPORT breakfast show since 2020 where she shares duties with Alan Brazil, presenting on Monday, Tuesday and Wednesday. 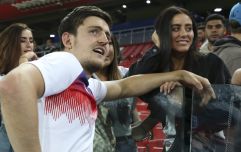 END_OF_DOCUMENT_TOKEN_TO_BE_REPLACED

After she was first appointed to the role, she tweeted: "The talkSPORT breakfast show has been in the custody of the legendary Alan Brazil for nearly 20 years and I’m proud to take over his mantle, waking up sports fans at the start of the week.

"I’ve had great fun filling in for big Al and being part of the talkSPORT family. Now on Monday to Wednesday, listeners can expect more big guests, sports chat and classic talkSPORT fun at breakfast."

Woods is also regularly seen working for Sky Sports on Premier League games as well as the channel's coverage of the darts.

She also features on DAZN as part of their coverage for the boxing and was also recently appointed to present the coverage of the England women's team on ITV.