WATCH: Game of Thrones fans are convinced they saw an old character's ghost in episode 4

What does this mean?

You'll be delighted to know that there are no spoilers in this post.

END_OF_DOCUMENT_TOKEN_TO_BE_REPLACED

Game of Thrones is in full flight now and episode four was the highest viewed episode of the show ever, grabbing the attention of over 10.17 million people.

People are watching Game of Thrones extremely close making sure that they don't miss out on any small details that may occur.

However, we can guess that a lot of you missed out on this vital moment in the show last weekend but this Reddit user did not.

With a username of GrennsGal, they noticed something odd at the moment where Arya tells Brienne:

"You swore to serve both my mother's daughters.”

At that exact moment, a shadow walks by in the background and fans believe that the ghost is that of Catelyn Stark who died in season three's famous Red Wedding.

Can't see it? How about now? 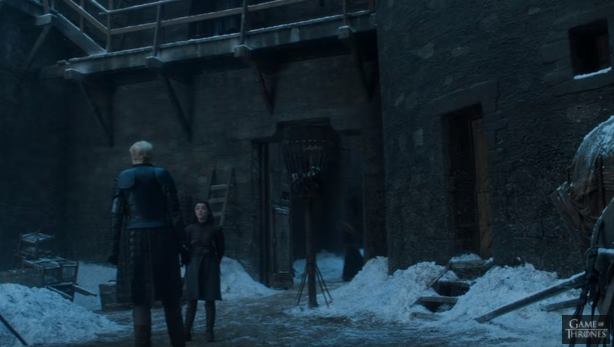 If you watch the sparring scene in S07E04 between Arya and Brienne, when Arya asks 'Didn't you vow to serve both my MOTHER's daughters?' - at the word MOTHER you can see a woman in a long green dress w/ long auburn wavy hair with her head down walking past the background gate, resembling Cat.

"If it's unintentional, it's awesome. If not, more awesome. Catelyn cheking on Brienne keeping her vows."

If you look closely at it, it doesn't look like an actual person but more of a hologram of someone that was placed into the video.

What do you think? Is there something more to this theory or is it just a theory?

popular
Incredible case of the only known individual whose parents were two different species
TikTokers are utterly convinced there is a secret zombie apocalypse going on in China right now
Darius Danesh opened up about his health struggles before his tragic death aged 41
Pop Idol star Darius Danesh found dead aged 41
Jamie Foxx and Snoop Dogg's vampire movie surges to the top of Netflix charts
People are sharing 'evidence' that history's biggest event was staged by humans
Darius Danesh pictured with Gerard Butler before his death
You may also like
Entertainment
UK Office officially better than US Office, according to huge critic poll
Entertainment
First trailer for Game of Thrones prequel House of the Dragon released
Entertainment
Emilia Clarke said Jason Momoa got her as drunk 'as humanly possible' during reunion
Entertainment
Game of Thrones creator George R.R. Martin promises different ending from TV series
Social Media
Sophie Turner posts 'time ain't straight and neither am I' on Instagram and fans lose it
Next Page