It's been six years since we had a Christina Aguilera album but today the superstar singer breaks the hiatus by announcing that her sixth studio Liberation will arrive this coming June. 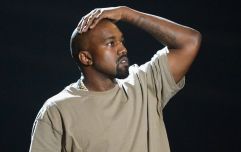 END_OF_DOCUMENT_TOKEN_TO_BE_REPLACED

Also releasing a video for the song, it might start off looking like any other pop video but towards the end things get a little, well, weird.

Closing her eyes, Christina holds her head up while a clear liquid is poured all over her face. The first thing that came to my mind was: "What is it?"

Is it baby oil? Syrup? Hair gel? I just don't know. But what I do know is that it's a little on the strange side.

Take a look for yourself.

The track listing for the Grammy Award-winning singer/songwriter's new album is as follows:

popular
The JOE Friday Pub Quiz: Week 271
Tobey Maguire Spider-Man spotted in No Way Home merchandise
Over 200 kilos of cocaine with Liverpool FC branding seized
Pro Volleyballer spends £590K believing he was dating supermodel Alessandra Ambrosio for 15 years
Ava White, 12, dies after Liverpool stabbing - four boys aged 13 to 15 arrested on suspicion of murder
Woman left devastated when nobody turned up to her Friendsgiving
Boyfriend who stabbed partner 30 times while high on cannabis brownie cleared of murder
You may also like
Music
Listen to first track from the upcoming Creed II soundtrack
Music
The JOE Music Quiz: Week 17
Entertainment
Kendrick Lamar-helmed Black Panther soundtrack tracklist revealed & it's epic!
Entertainment
I listened to the new Migos album & struggled to get past the first six tracks
Entertainment
Will Smith says he once had so much 'rampant sex' it made him 'vomit'
Next Page