American comedians mock our obsession with Great British Bake Off

It's undeniable that there's something uniquely British about the Bake Off.

The whole thing may be about to be disbanded as the show format is transferred to Channel Four without a number of the key players, but its immense popularity and twee appeal is only just being felt across the water in the US.

PBS, or Public Broadcasting Service, are showing Love Productions' BAFTA-winning show in the States, and it has gained enough of a following to go from cult hit to mainstream phenomenon. In a way it's easy to see why.

GBBO, much like Downton Abbey, appeals to an outdated and very romanticised American perception of what Dear Old Blighty is still like, with its eccentric bent and chintzy feel. They love all that high tea and cake business.

So popular is the programme that Saturday Night Live have done a pisstake of it, featuring Brit actress Emily Blunt. We're big fans of SNL here at JOE Towers, and yet we're not entirely sure this sketch really works.


The concept seemed to be to juxtapose two common and contradictory stereotypes of UK telly - one of the genteel Bake Off variety, and the other the leery Jeremy Kyle/Big Brother type. 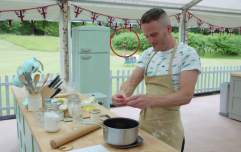 Six things you might have missed during this week's GBBO

END_OF_DOCUMENT_TOKEN_TO_BE_REPLACED

Firstly, we're not convinced it's all that funny, despite the decent premise, but secondly we've got no fucking idea what accent Blunt and her gum-chewing pal are going for.

They're supposed to be from the UK's most 'Brexit' town, but the Sicario star flits between Leeds and Manchester (we think), whilst SNL regular Cecily Strong goes from Scouse to Glaswegian to we don't know what.

Judge for yourself. This is what Americans think of us...


popular
Here's the full list of McDonald's reopening this week
QUIZ: Can you name the Football Italia cult heroes? | Part 2
QUIZ: Identify the brand from just its slogan
Thousands march in London for Black Lives Matter
The JOE Friday Pub Quiz: Week 193
The hardest brand logo quiz you'll ever take
A definitive ranking of every swear word from worst to best