END_OF_DOCUMENT_TOKEN_TO_BE_REPLACED

It’s his eighth studio album and it’s probably one of Kanye West's most anticipated, not because of the music necessarily but because the public are hoping to get some answers from it.

Does he address his recent support of Donald Trump? Does he give a reason for claiming publicly that slavery was a choice? Does he finally explain all of his erratic behaviour that has come to light over the last few years especially?

Some will look at his lack of answers (something he famously claimed Sway didn’t have) as an act of betrayal. Some will look at it as Ye being Ye. And then there will be those who need more than just a day to analyse his words, his music and underlining message - if there is one.

Hosted by Chris Rock, Kanye West last night had a playback session for his new album in Jackson Hole, Wyoming. Titled Ye, according to Rock, the seven track project played out across a ranch to an audience that included the likes of Nas, Fabolous, Tim Westwood, Jonah Hill and more. It was also live-streamed.

Featuring KiD CuDi, Nicki Minaj, Ty Dolla $ign, 070 Shake and others, Ye has now finally surfaced on all streaming sites - it only took half a day, typical Kanye, right? It’s the second of five planned G.O.O.D. Music releases - the first was Pusha T’s DAYTONA, released last week - and will apparently be followed up by albums from Nas, Teyana Taylor and a joint effort from Kanye and KiD Cudi, all of which will be produced entirely by Kanye himself.

Breaking down the album track-by-track, here’s a first listen review of Ye.

*Please note that song titles and features are subject to change, this is Kanye West after all.

According to Kim Kardashian "Kanye shot the album cover on his iPhone on the way to the album listening party."

"I Thought About Killing You"

More like a trip to the psychiatrist’s office than a song - well, to begin with at least - it appears as if Kanye is talking to himself on the opening track of Ye. When he says, “Today I seriously thought about killing you/ I contemplated, premeditated murder,” he’s either talking to the other half of his split personality - Kanye has admitted to being bipolar - or he’s fantasising about killing the man in charge of his mother’s operation that caused her untimely death. Which is it? Maybe it’s both. 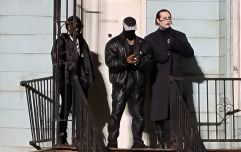 END_OF_DOCUMENT_TOKEN_TO_BE_REPLACED

Battling good and evil, darkness and light throughout, which is a theme Kanye has always chosen to explore artistically, “I Thought About Killing You” isn’t as enjoyable for the listener as it is therapeutic for Kanye. Sonically sounding like “Ultralight Beam”, complete with gospel hums assisted by autotune, it picks up the tempo midway though after it builds to a drum heavy horror movie with screams to boot.

Also addressing the naysayers and the haters who can’t wait to see Kanye fall off, this is definitely more for those who like a conflicted and random Kanye West.

Picking up where the last track ended, the beginning of “Yikes” is instrumentally frightening and some of the song’s lyrics even touch upon scary subject matters such as the devil, demons and zombies.

But the song isn’t “Thriller” part two, even if Michael Jackson (and Prince) is mentioned, it’s actually about drug addiction and the battles that come with it. In a recent interview with Charlamagne, Kanye admitted to being on medication. On “Yikes” he alludes to amphetamines, hallucinogens and prescription drugs, and discusses the highs and lows they can inspire.

While it’s not the strongest moment on Ye, it does provide some clever wordplay: "Russell Simmons wanna pray for me too/ I’ma pray for him 'cause he got #MeToo’d.”

We’ve all become accustomed to Kanye’s comedic playfulness on certain songs, with that said this is probably the funniest moment on Ye. On “All Mine” he explores infidelity and the temptations that can feed into our desires and eventually land us in some hot water.

Not afraid to use family members as the subject of discussion, he’s quick to call out Tristan Thompson for cheating on his sister-in-law Khloe Kardashian but then points out that because he’s a rich basketball player he can essentially get away with it, but us regular folk might not be so lucky.

Yes Kanye! This is what we wanted from you. Sentimental, honest, heartfelt, these are just a few words that can be used to describe “Wouldn’t Leave”.

Discussing difficult conversations had behind closed doors as a result of his own actions, Kanye West is laying it all out on the line for his family on “Wouldn’t Leave”. He loves them so much so that even though his heart is big, his skin isn’t big enough to convey the love in the form of a tattoo. It’s impossible.

Sounding like something that wouldn’t have sounded out of place on 808s & Heartbreak, the instrumental is perfect for this particular song. It’s moving and warm, and being blessed with vocals from Jeremih, Ty Dolla $ign, PARTYNEXTDOOR (uncredited) and Young Thug is just the icing on the cake.

The fact that this song starts with sampled Slick Rick vocals from “Hey Young World” is an indication that the “old Kanye” has returned for “No Mistakes”. Add in the triumphant pianos and jubilant Charlie Wilson vocals - who doesn’t love uncle Charlie? - and you’re given a front row seat to what Kanye is actually capable of.

A story of perseverance, Ye reflects on the last few years he’s been battling his inner demons, negative press, and possibly shade from some of his peers. When he spits “I don't take advice from people less successful than me, huh?/ Ain’t no love lost, but the gloves off” is he talking about Drake?

Full of glaringly obvious positive quotables, don’t be surprised if you start seeing Instagram captions that borrows lines from this one.

A taster of things to come from the Kanye West and KiD CuDi collaborative album, reportedly being released next week, “Ghost Town” is about freeing up your mind state and projecting yourself to a simpler time, in this case when we were kids. For Kanye he wants to rest like God did on the seventh day, he wants to focus on enjoying time with his family instead of obsessing over his legacy.

Introducing New Jersey newcomer 070 Shake, who closes the record out, there’s a lot of layers to peel back on this one. Reading between the lines isn’t as simple as you might think, but then maybe it is. Take it as you wish.

But what is obvious is CuDi’s rock influence. The strong presence of guitars on “Ghost Town” and the way they manoeuvre throughout sounds very reminiscent of a couple of tracks on CuDi’s sophomore album, Man on the Moon II: The Legend of Mr. Rager.

Saving the best for last, there really is no better way to describe “Violent Crimes” than beautiful - and if you’re not careful it might even bring a tear to your eye.

Focusing on how a man can change for the better the moment he has a daughter, Kanye West puts his own experience under the spotlight. Admitting to having acted reckless around women, Ye says he’s now changed because of the birth of his daughters, North and Chicago.

Offering advice over a low synth backdrop that could so easily be a Phil Collins song, Kanye acts humbly and admits to being protective more so than ever before: “I hope she like Nicki, I'll make her a monster/ Not havin' menages/ I’m just being silly/ I answered the door, like Will Smith and Martin/ Nigga do we have a problem?/ Matter of fact Marlin, this ain’t Meet the Fockers/ I’ll beat his ass, pray I beat the charges.”

Always pushing boundaries, there’s even a Nicki Minaj voice note used on the track. Who does that? Oh, that’s right, Kanye does that.

The only thing missing? Chance The Rapper.

popular
Man dies three days 'after GP sent him home and threatened to strike him from surgery list'
Marcus Rashford responds after being pictured with disgraced rapper Wiley
Outrage after Sadio Mané allowed to play on for 10 minutes after being knocked out
Schoolboy loses both nipples after classroom dare involving two cans of Lynx
McDonald's launching new Big Mac with twist for first time ever in UK
Peter Dinklage calls Snow White and Seven Dwarfs remake 'f*cking backwards'
Brewdog to sue BBC over allegations made in new documentary
You may also like
Entertainment
From Becky with the hair to Kanye's Hurricane 'confession' - how cheating sells records
Entertainment
Kanye West sets himself on fire during Donda listening event
Music
Kanye West has become the richest black man in American history
News
Kim Kardashian files for divorce with Kanye West, according to reports
Entertainment
Kim Kardashian and Kanye West reportedly filing for divorce
Next Page