Approximately two million people are being told to stay at home

The people of Auckland, New Zealand's most populous city, are being told to stay at home as the country attempts to contain its first outbreak of the highly contagious UK variant of Covid-19. 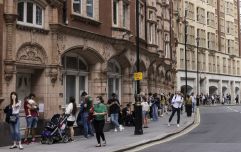 New Covid variant under investigation in the UK, PHE says

END_OF_DOCUMENT_TOKEN_TO_BE_REPLACED

Prime Minister Jacinda Ardern ordered the three-day lockdown for Auckland after three family members were found to be infected in the city.

Schools and non-essential businesses in the area are closed and residents are barred from leaving the city, except for essential reasons.

New Zealand's Department of Health confirmed that the decision was made due to the presence of the UK strain of coronavirus in the area.

"This result reinforces the decision to take swift and robust action around the latest cases to detect and stamp out the possibility of any further transmission," it said.

New Zealand has seen just 25 Covid-related deaths in a population of five million in the past 12 months.

Ardern recently announced that the country would be closing its borders for the entirety of 2021.

Just over two weeks ago, 22,000 people attended a gig by popular New Zealand outfit Six60, with no requirement for masks or social distancing.

popular
QUIZ: Can you name these 5 players from their career paths?
New video of Wayne Rooney on night of ‘stitch up’ pics emerges
Police find 48TB of 'mostly adult' material in Shilpa Shetty's home after husband's arrest
Man who claims he’s Charles and Camilla’s child is now using his son as ‘proof’
Conor McGregor deletes disgusting tweet about Khabib's dead father
Filipino Olympic weightlifter will be given $660,000 and 2 houses for winning country's first gold
Coleen Rooney vows to stand by Wayne after semi-naked hotel picture 'stitch up'
You may also like
News
Jeff Bezos calls out NASA over 'mistake' Elon Musk moon-lander contract
Sport
Aussie coach apologises after wild celebrations go viral
Entertainment
Peter Kay returning to stage for first time in three years
News
University students could need to be double jabbed to stay in halls
News
Starmer says Butler was right to call PM a liar, but was rightly removed from Parliament
Next Page