Lennox Lewis vs Mike Tyson: the story behind the infamous press conference brawl

"I want to eat his children"

The 2002 world title fight between Lennox Lewis and Mike Tyson was one of the most anticipated matches in modern boxing history. 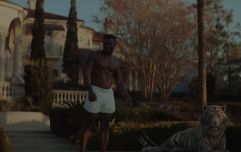 END_OF_DOCUMENT_TOKEN_TO_BE_REPLACED

The run-up to the bout was littered with bad blood between the two fighters - most memorably Mike Tyson's infamous comments that he wanted to eat Lennox Lewis' children.

Thankfully Tyson didn't get to do that, but tensions did erupt before the two boxers even stepped in the ring, when a mass brawl kicked off at a press conference in New York.

Lennox: The Untold Story is a new documentary that covers the career of the legendary British heavyweight. We've got a clip for you from, detailing the first meeting between Lewis and Tyson, and that infamous press conference brawl.

“All of a sudden, Tyson takes his hat off and throws it to the ground, and starts marching towards me.”

This is the inside story of Lennox Lewis and Mike Tyson's infamous 2002 press conference brawl. pic.twitter.com/B7CU4cOIkq

Born into humble beginnings in the east end of London, abandoned by his father and raised by a single mother, Lennox Lewis’s rise to the pinnacle of boxing, and his place as one of the greatest heavyweight fighters of the modern era, defied all odds.  Though an Olympic gold medallist and a three-time heavyweight champion of the world, many boxing fans are unaware of the challenges that Lewis faced in his pursuit of greatness.

LENNOX: THE UNTOLD STORY is the official Lennox Lewis documentary chronicling an incredible life and sporting career.  The film gives unprecedented insight into Lewis’ journey from a troubled youth in West Ham, to uprooting to  Canada and discovering a natural ability in the boxing ring before going on to fulfil his destiny by reaching the top of heavyweight boxing.

LENNOX: THE UNTOLD STORY is available on digital and DVD now

Listen to the latest episode of From The Corner, with DAZN and JOE